Groove Garden Music Studios was founded by musician and songwriter Rob Taube. Rob brings over twenty years of experience as a songwriter, musician, teacher and music producer both on the performance side as well as with mixing and production. A former member of the Detroit band Scratch, Rob has played all of his life as a professional  keyboardist, guitarist, singer. He has worked with James Taylor, Carla Tongerson of the Walkabouts, Nikki and the Human Element, Hank Williams Jr., Leon Russell and a well as with Simon Kirke, the multi-talented drummer of Bad Company. Rob is passionate about music, either producing it or playing it. 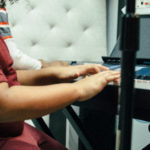